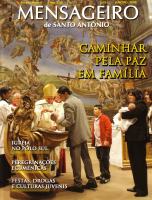 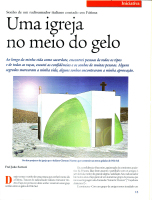 Father João Sartori is a priest that lives in Coimbra, Portugal. I met him last April 2007 at Fatima during a pilgrimage and we did talk about the project of build a Church in Antarctica.

He is one of editor of the Famous Magazine called  “Messenger of San Antonio” ; he did share the initiative and written a great article about it.

Thanks though to Father João Sartori, the “Mensageiro de Santo Antonio” did publish in its January 2008 issue,  3 pages about the project of build a Church in Antarctica at the Italian base Mario Zucchelli. 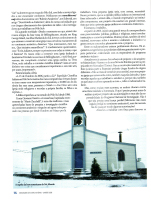 Santo Antonio”
is published in 10 different languages, let’s hope it will be retaken
in other Countries and let’s hope the dream comes trough the bureaucracy
and became one day a reality!

On page 15, 16 and 17 of the magazine also are the pictures of the Chapel of the snows at McMurdo, the Trinity Church at Bellinghausen and Capilla Reina de la Paz  at the Chilean base Presidente Frei.

Thanks  to Father João .

Help us to reach the goal, stay with us and follow our dream!