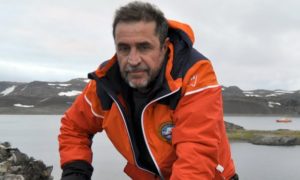 The commander of a Spanish Navy Rsearch Ship has died in Antarctica after apparently falling overboard.

Javier Montojo Salazar, Captain of the frigate Hesperides, disappeared on Friday night when the ship was near the Juan Carlos I° research Base on Livingstone Island.

Spain’s Ministry of Defence said a search and rescue operation was launched using “all available resources” but the body of the 53-year-old sailor was recovered from the sea six hours later.

Though the pages of WAP website, on behalf  of the community of the Icy Continent and Hams,  we want to express our deepest condolences to the family and colleagues of Javier Montojo Salazar

Pygoscelis Adeliae is commonly known as the Adélie penguin, after the wife of French explorer Jules Dumont d’Urville, the man who first documented them in 1840. Though they are not especially uncommon, scientists have been concerned that their Antarctic population has been on a steady decline for the last 40 years. Now, a new study conducted by the Woods Hole Oceanographic Institution (WHOI) has revealed a previously unknown “supercolony” of more than 1.5 million Adélies living in the Danger Islands, a remote archipelago on the northern tip of the Antarctic Peninsula.

“Until recently, the Danger Islands weren’t known to be an important penguin habitat,” says Heather Lynch, an ecologist at Stony Brook University who co-led the study, in a release. The remoteness of the archipelago, named by English captain James Clark Ross after he almost crashed into its ice-covered rocks in 1842, makes it hard to access.

Remote images gave researchers a fresh look. In 2014, Lynch and colleague Matthew Schwaller, a scientist at NASA’s Goddard Space Flight Center, spotted some telltale guano stains in satellite photos of the islands. To ground-truth their suspicions, Lynch and an international team of ecologists got on a boat. Upon their arrival in December 2015, the group was confronted with hundreds of thousands of penguins nestling amid the icy rocks. Using neural network analysis of drone images they took of the colony, the scientists were able to determine the size of the population, as well as how changing temperatures and sea ice are impacting the island ecosystem. Their results, published this month in the journal Scientific Reports, show that there are currently more than 750,000 breeding pairs of Adélie penguins in the Danger Islands, more than the rest of Antarctica combined.

Thanks and credit to:  http://www.bbc.com/news/science-environment-43250744 and https://www.theguardian.com