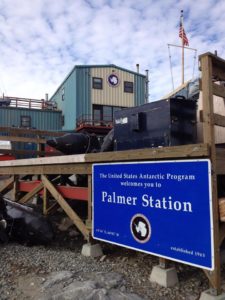 Located on Anvers Island near the Antarctic Peninsula, Palmer Station (64° 46’S, 64° 03’W) is named for Nathaniel B. Palmer, who in 1820 on a sealing expedition in his 47-foot (14-meter) ship the Hero became the first American to record sighting Antarctica. The original station was built in 1965. In 1967, the U.S. Navy began construction of the current larger and more permanent station approximately a mile east of the original site. The first building at the new station, the biology laboratory, opened its doors to science in 1970. Today, two main buildings and several smaller structures make up Palmer Station and provide housing and research facilities for scientists and support personnel. Of the three U.S. Antarctic stations, Palmer is the only one that is accessed routinely during the winter.

States Antarctic stations, as well as Arthur Harbour and the Bismarck Strait beyond. Palmer station webcam at: https://www.usap.gov/videoclipsandmaps/palwebcam.cfm

Thanks and credit  to National Science Foundation (NSF)

And now … a quick tour of Palmer Station WAP USA-23