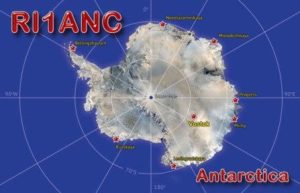 On December 24,  the RI1ANC license will end, a new license is coming to be registred. The new call-sign will be  RI1ANV. Alex will be at the station until February 2019. QSL via RN1ON

RI1ANM (Alexander Solodov, RX3ABI) was at Vostok the whole 2018 as well; he  was not very active and his overwintering at Vostok Sation ends soon.