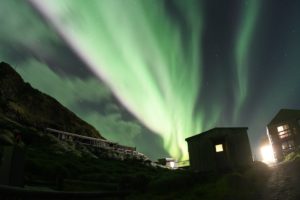 Over the weekend, brilliant auroras lit up the skies above Macquarie Island, (WAP AUS-Ø8)

“It was so ridiculously and beautifully bright that all the puddles around station and the ocean really did reflect green” said photographer and station medic Dr Kate Kloza.

“They were some of the brightest I have seen in my polar career, with reds visible to the naked eye” she add.

The Macquarie Island Station in the southern ocean, is a permanent Australian subantarctic Research Base commonly called Macca. The station lies at the base of Wireless Hill, between two bays on the isthmus at the northern end of the island and it’s managed by the Australian Antarctic Division (AAD).

Let us share this amazing view among the WAP readers.