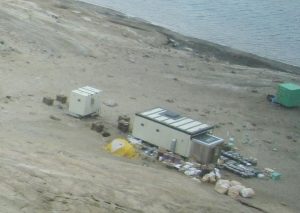 Kizahashi Hut is located at 69°28’ South, 39°35’ East in a beach at the headland on Skarvsnes, one of the islands of the Flatvaer group on the coast of Queen Maud Land.

Flatvaer Islands (in Norwegian: Flatvær, means “flat islands”), also known as the Ongul Islands, are a group of small islands lying at the east side of the entrance of Lützow Holm Bay, 4 km from the Antarctica coastline.

Kizahashi-hama (Kizahashi beach) was mapped from survey and aerial photographs taken during the Japanese Antarctic Research Expedition (JARE) 1957-1962. The name Kizahashi-hama was given by JARE in 1972.

Kizahashi Hut at Skarvsnes stands among a field camp which consists of the main hut, a generator hut, a small (green) lab hut and a series of small tents for sleeping and work. The North Face dome tent is a science tent.

At the light of this evidence, Kizahashi Hut will enter into the WAP-WADA Directory as WAP JPN-NEW and more precisely: 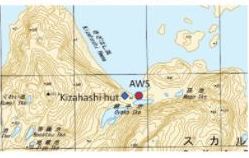 As far as we know, Kizahashi-hama Hut is frequently visited by a Team of scientist from Japan and other different Countries who are going there for marine life observation and scientific measurement such as Geosphere and to check  maintain the AWS (Automatic Weather Station) nearby at  69º28′25″ South, 39º36′43″ East.