Here below, a view of the 6ØATS  Awards available from october 2021, according to the Countries that have issued these particular Awards: 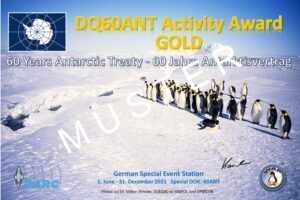 In recognition of the activities related to the 6Øth Anniversary of the entry into force of the Antarctic Treaty, the local association S44 issues the “DQ6ØANT Activity Award” in 3 levels. 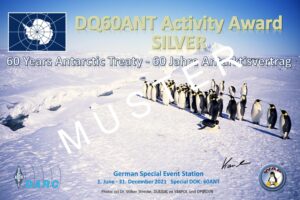 The award can be acquired by all licensed radio amateurs. To apply for the award, at least 4 QSO’s must be made for the basic bronze diploma. Each QSO with DQ6ØANT can be scored once per band and mode. Operating modes in the sense of this diploma are CW, PHONE (SSB, FM, Digital Voice), DIGIHIS (RTTY, PSK, Hell) and DIGITAL (FT8, FT4). It count connections between 01.06.2021 and 31.12.2021.

Necessary for the class are: 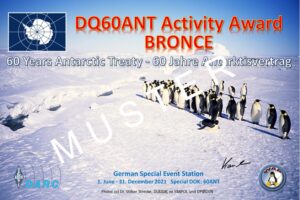 For these diplomas to the operating modes CW, Phone and DIGITAL still the operating mode DIGIHIS, digital-historical, was introduced. These additional points should motivate the OP’s to start again the programs for RTTY and PSK. 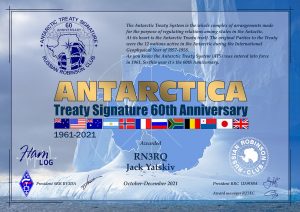 To receive the award it is enough to make 1 QSO / SWL with each of 12 stations using special callsigns in a period from October 1st to December 31st, 2021.

The Award Program preview Award and Plaque, as shown in the pictures  attached hereby.

To receive a plaque, you need to make 2 QSO / SWL with each of 12 stations using special callsigns in a period from October 1st to December 31st, 2021.
QSL info: All QSL Rx60ANT via RZ3EC (OQRS (better)/direct/bureau) 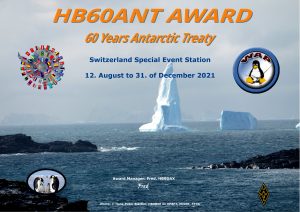 The  HB6ØANT Activity Award is issued in commemoration of the Memorial Year “6Ø Years of the Antarctic Treaty” and in recognition for the links with HB6ØANT, this short-term diploma is issued.

The diploma can be acquired by all licensed radio amateurs. To apply for the diploma, 6 QSOs must be made on different bands in different modes. Each QSO is scored once per band and mode. Modes of operation for the purpose of this diploma are CW, PHONE (e.g. SSB, FM or Digital Voice) and DIGITAL (e.g. FT8 or FT4).
Connections between Aug. 12, 2021 and Dec. 31, 2021 count. The diploma is issued free of charge to active radio amateurs and only electronically as a download. It can only be downloaded on this website.

There is a dedicated website HB60ANT Activity Award – 60 Jahre Antarktisvertrag where, by entering your callsign and name (for the Award) you can see how many QSO’s of you are already in the HB60ANT log.

Italy is one of the Countries that boast a stable presence in Antarctica, with both nationally and multi-nationally Scientific stations. This year marks the 6Øth anniversary of the Antarctic Treaty Signature and  the ARI Section of Sanremo (IM) in agreement with WAP (Worldwide Antarctic Program www.waponline.it )  establishes, as part of the international celebrations,  the  6Ø ATS (Antarctic Treaty Signature). Award program, released to OM/SWL in 3 distincted  classes: Basic, Silver and Gold. 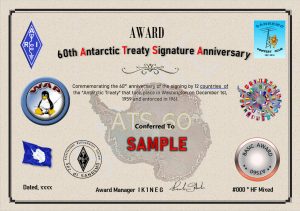 The Award is issued to OM/SWL who have made contact/Hrd  with at least 5 Special ANT stations in the time frame of October 1st through  December 31st 2021 on any band or mode. Eventual SES Stations worked before Oct. 31st (some of these SES have starded earlier), are also valid for all the 3 Awards (Basic, Silver and Gold).

All the SESs active, have a WAP reference number that will distinguish them and facilitate the search on the Cluster. The WAP reference related to their calls  will have to be marked in the appropriate column of the application form table, according to the sample below. 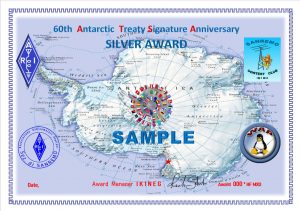 Each Special Event Station (SES) logged, is worth 2 points. For the Silver diploma, 20 points will be needed. 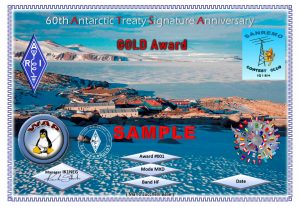 Only QSOs/HRDs made between October 1st 2021 through  December 31st 2021 are valid for apply for the Awards even if, the eventual SESs worked before Oct. 31st (some of these SES have starded earlier) are also valid. The only request is to report,  for each ones the WAP reference number.  OM/SWL who have reached the necessary score for the Gold Diploma, can apply for both the Basic and the Silver Awards with 3 different separate applications.

QSLs are not needed  with the application. The Awards are free and will be sent by e-mail in PDF (or JPG) format, upon  the request of the interested party.

The request, joined with the Application Form  must be sent by e-mail to the Award Manager  IK1NEG:  ik1neg@alice.it