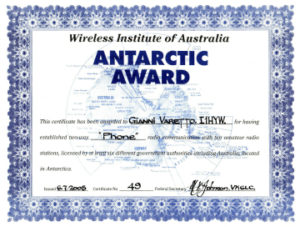 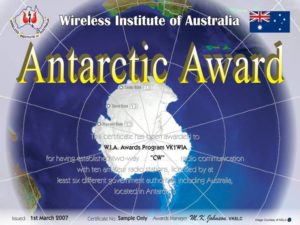 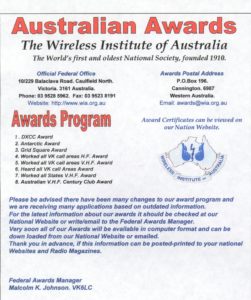 General Rules  (For all Certificates Awards)

Applicants should state whether they are W.I.A. Members and, if so, list their membership number.

Where relevant, changes in Callsign and dates of such changes should be indicated.

Applications (Official Hard copy or Computer file) should be sent to the W.I.A. Federal  Awards Manager.

Contacts for the awards can be made from all call areas, pertaining to the same country unless otherwise stated.

Crossband contacts do not qualify, nor are those made through terrestrial repeaters, aircraft, internet (IRLP etc),

or operations to or from sea-going vessels (maritime, mobile or stationary).

All contacts must have been made after 1st. January 1946, unless otherwise noted.

interpretation of these rules shall be final and binding.

Applicants need to hold QSL cards for all QSO’s claimed. However, “do not send QSL cards” with your application.

Contacts should be listed in numerical, alphabetical order i.e. (1A-9Z, A2-ZS). On the bottom of each data

sheet a declaration signed by an official of a recognized Society or by two licensed Radio Amateurs.

Signatories to the declaration should clearly indicate their Names, Callsigns and dated.

It is recommended you use our W.I.A. official computer formatted documents for all awards and updates.

Schedule of fees. (Single award only)

Where a fee is payable this should be sent with the official application to the Federal Awards Manager.

Free to all Wireless Institute of Australia members.

Ten (10) American Dollars ($10 US) or equivalent rate of exchange value in IRC’s for all overseas applicants.

from Antarctica.  The ten contacts must include stations licensed by at least six (6) different government

Antarctica is defined as the landmass, including islands and permanent ice shelf, below 60 degrees south

latitude.  (This excludes Heard, Macdonald and Macquarie Islands, being sub-Antarctic).

Only contacts made on or after the 23rd February 1988.