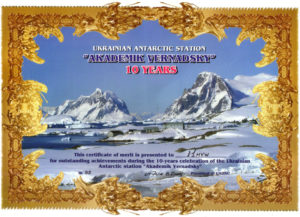 The diploma is free-of-charge. Just a postage to cover costs is required.
Information have to be asked to:
Roman Bratchyk UT7UA, PO BoxB-19, Kiev 01001- Ukraine. 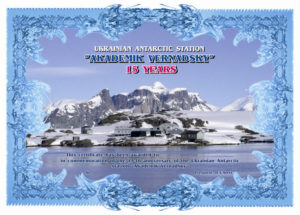 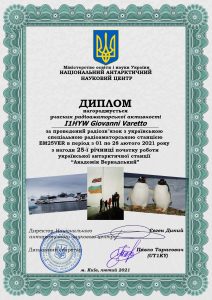 EM25VER  (WAP-312) is a  Special event callsign  been issued to  celebrate the 25th Anniversary of Ukrainian Antarctic station “Akademic Vernadsky” in Antarctica.

A special Award has been issued and could be received upon request .

To get the free  electronic award “25 years of the Ukrainian Antarctic station “Akademic Vernadsky” only one QSO/HRD is needed  with EM25VER.

Send your request in the form of a Log extract,  to the Award  manager Pavlo UT1KY:
e-mail: ut1ky@ukr.net

“The flight over the South Pole” 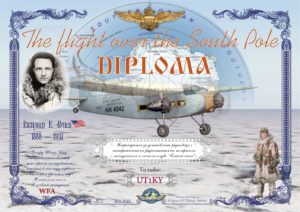 25 October 2013 marks the 125th anniversary of the birth of the famous Arctic and Antarctic explorer Richard J. Byrd. 2014 marks 85 years of the first in the history, of mankind flight over the South Pole. A commemorative diploma “Flight over the South Pole” is dedicated to these two pioneering events.
Another interesting fact, is that the famous Soviet polar explorer and radio operator Ernst Krenkel January 12, 1930, did work from Polar Station (PST) “Quiet Cove” on the island of Hooker (Franz Josef Land), set the record for distance radio communications on HF with its “antithesis” – the radio base station of the American Richard Byrd’s expedition to Antarctica (the distance – about 20 thousand km). Krenkel callsign was “RPX”, and Howard Mason, radio operator of Byrd expedition, was “WFA”. Krenkel used a transmitter power of 250 Watts (wavelength 43 m) which was delivered to him on the island and set on August 1, 1929. Power of the Byrd’s expedition transmitter 800 Watts, it was on “Little America”, the US Antarctic base on mainland Antarctica. This QSO still has a record range in the USSR.

The Award is issued to licensed Radio amateurs and SWL in all countries for contacts made all bands all modes from 1.8 – 28 MHz. Repeated QSO allowed only on different bands and different modes.

The electronic format  of  the Award is free. Requests for paper Diploma, has to be followed by 5 USD and it will be sent by registered mail items view:
Applicants have to send a Log extract (both electronically and in writing), certified by two Amateurs before December 31, 2014 to the Award Manager UZ9RR
E-Mail: uz9rr@qrz.ru or,  for direct request by surface mail to:
Yury Pronin
PO Box1480, Chernihiv, 14033, Ukraine. 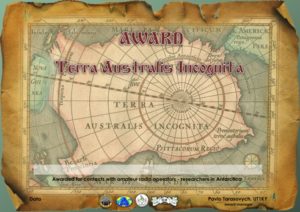 This is an Award dedicated to all the Researchers in Antarctica, and it’s  issued with the support of the Ukrainian Radio Clubs : UADXC, DELTA CLUB, RIVNE DX CLUB, UFF (Ukrainian Flora Fauna).
Terra Australis Incognita,  is available to Hams that have made contacts with ”Special Callsigns” Radio stations in the days of WAP Antarctic Activity Week  as well as stations that did operate from Antarctica  or did  work and wintered in Antarctica at any of the Research Stations, Marine and seasonal expedition and/or on board research vessels and aircraft.
To apply for the Award is necessary to have made at least :
1 QSO with  Amateur radio stations in Antarctica
1 QSO with Special stations that operate in AAW (Antarctic Activity Weeks) of the WAP (Worldwide Antarctic Program )
2 QSO with Amateur radio all over the world who have worked in the past and/or  wintered in Antarctica in a Research stations,  marine and seasonal expedition and/or on board  of Research vessels and aircraft.
Contacts have to be made starting 01.01.2014, any bands, any modes; same rules are also valid for SWLs . The award is available in electronic form.
Send your request in the form of a Log extract,  to the Award  manager Pavlo UT1KY:
e-mail: ut1ky@ukr.net 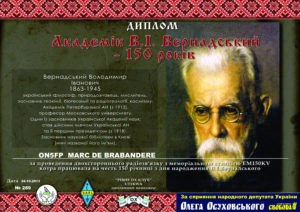 The certificate is issued to commemorate the 150 Anniversary of the birth of Volodymyr Ivanovych Vernadskyy: Ther Ukrainian Antarctic Base is named after him.

Volodymyr Ivanovych Vernadskyy (13-03-1863_6-01-1945) was an Ukrainian meneralogist and geochemist who is considered one of the founders of Geochemistry, Biochemistry  and Radiogerology