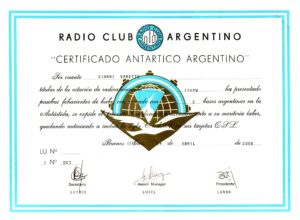 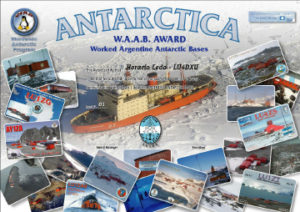 2.-  To get the Award, the applicants must show to have worked and confirmed by QSL cards, at least of

3.-  Of Ham stations and Antarctic Bases operating from the Antarctic Continent must credit point

number 2 to get the Award.

4.-  Contacts could be made complied to the rules of Radio Amateur’s Service by any of their transmission

mode and frequencies bands, therefore on bands from 2 to 160 meters and on SSB, CW, RTTY &

6.-  The list of the actives Argentine Antarctic Bases is:

7.-   Any new Argentine Antarctic Base on the air, will be add to the list and available to get the Award.

8.-  W.A.A.B. Award is available from OM and SWL following by e-mail request to the Award Manager

It is necessary to send:

this Country has been followed, and a detailed list of the contacts made and confirmed in alphabetical number’s order as: Callsign, Date of QSO and GMT time.

Note: It could be possible that occasionally some QSL cards will be required for check or in case

9.-  The Technical Award Manager is Horacio Ledo  LU4DXU, he will also take care of eventual questions

and contacts with the chasers.  lu4dxu@hotmail.com

11.- The list of Awards issued will be published regularly on the web site www.lu5da.org.ar

12.- The W.A.A.B. is conceived and controlled by rules in order to get a modern and simple certificate, by

the lowest possible bonds and bureaucracy. 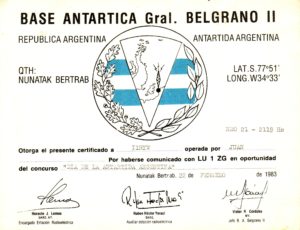 * (Day of Argentinian Antarctica,   falls each year  on February 22nd)