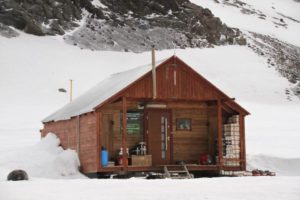 Lions Rump Refuge (62° 06′ South, 58° 05′ West) is a strip of ice-free beaches, moraines and rocks, located on the King George Bay. It is separated from Arctowski Station (WAP POL-Ø1) by a glacier and the waters of the Bransfield Strait. The majority of this area is protected as ASPA 151 (Antarctic Special Protected Area), which in general can be called the equivalent of our nature reserve. The name of the refuge comes from the rock,Lions Rump  rlocated in the ASPA.

The Area takes its name from the distinctive rocky hill lying between the southern extremity of King George Bay and Lions Cove. Geologically, Lions Rump consists of Tertiary lavas and tuff containing thin brown
coal intercalations and petrified wood fragments. The front of White Eagle Glacier is marked by large, dome-shaped moraine ridges belonging to several Holocene stages of glacier advance and retreat.
The Area was originally designated as a Site of Special Scientific Interest in Recommendation XVI-2 (1991, SSSI No. 34) after a proposal by Poland on the grounds that it contains diverse biota and geological features and is a representative example of the terrestrial, limnological, and littoral habitats of the maritime Antarctic.