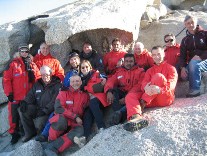 Lieutenant Colonel Franco Colombo, tell us  about his four past seasons in Antarctica in the wake of the Italian Expedition campaigns.

Franco said: At some stage in my four assignments, I  have always noticed the lack of a place of worship, and I have constantly tried someway to overcome it. The attached picture shows how, the devotion of our Team at MZS to the small  “Madonnina”  is real and heartfelt and on the day of the Immaculate Conception (8th December) a small procession is set till the place where the Virgin  stands in a small  altar beneath a rocky outcrop (though not all on the Base share it  …. but this is normal)
TNX Lieutenant Colonel Franco Colombo