The first Lunar Eclipse of the year occurred a week ago, so stargazers were glued to their telescopes.  This Lunar Eclipse did occur shortly after the year’s first partial solar eclipse. Around the world, millions of people saw this week’s lunar eclipse. Only a handful saw it from Antarctica. 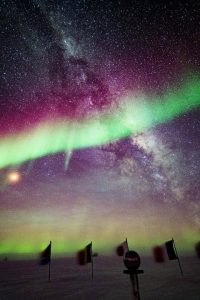 On May 15th, Thomas Leps tooks a break to go outside and photograph the lunar eclipse  from the geographic South Pole.  Leps operates the international BICEP array at the Amundsen–Scott South Pole Station (WAP USA-36). “We examine the polarization of the cosmic microwave background to look for evidence of gravity waves and primordial black holes in the early universe,” he explains.

“I was taking a time-lapse of the eclipse, but my camera shut off in the cold, the temperature was about -80F with 15 knots of wind” says Leps. “When I got it running again, a very bright aurora appeared in a single band across the entire sky, intersecting the Milky Way and passing over the eclipsed moon. I set up my camera as quickly as I could. Setting the camera can be tricky at these temperatures because the rear screen tends to freeze up after a little over a minute outside. In this case it all came together to make a great picture to remember the day by when I’m up North again.”