On the  weekend from 15th through 17th  Febr. 2019, Hams will get a chance to  work a couple of lighthouses located in the Chilean Tierra del Fuego Province, Magallanes Region. They are listed on the WAP-LH Directory and so far brand new-ones . 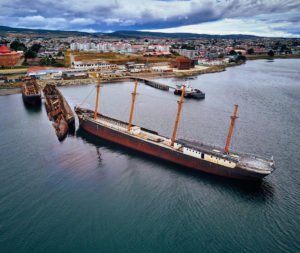 The “Muñoz Gamero” (former “County of Peebles”)  was a large four-masted boat launched in Scotland in 1875. It was acquired by Chile in 1898 along with two other sailboats. After his active life, he started operating in 1966 as a pontoon reservoir in Bahía Muñoz Gamero and finally ended his days as a breakwater in Punta Arenas in 1975. It is the boat that made a hall for public relations of the Navy.

A full-day walk around the center of Punta Arenas includes 26 locations that connect the city’s rich heritage with memories of expeditions to Antarctica since the end of the 19th century. One of this place to visit, is the one on  which, a lighthouse seems to be mounted  is the shipwreck of the “Muñoz Gamero” Unfortunately, we have not been able to find any other more detailed information, sorry about that!
The site will be activated by CE8RPA 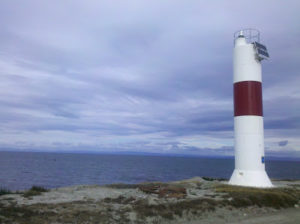 Positioned at the entrance to the bay of the same name, it mainly guides the ferries that make the connection between Porvenir and Punta Arenas as well as fishing boats.

Bahía Porvenir LH will be activated by CE8RJN

Being located on the Chilean Antarctic territories, both lighthouses will also qualify for WAP-WADA CHL-13