The Chapel of the Snows and its history – Part 1- .
Antarctica’s first church in this site, was built in 1956 by volunteers using surplus materials. This building was destroyed by fire in 1978. The only things rescued were the chapel bell, two stained glass windows, and various small religious items. In 1979 a Quonset hut was remodelled to serve as chapel, and the building was dedicated in December. By 1982 another Chapel of the Snows had been built close to the original site (again with volunteer labour using salvaged material).

The
Chapel of the Snows had not appeared in the 1956 plans for McMurdo
Station. Religious services were to be held in the mess hall. In
preparation for Antarctic research to be conducted during the International Geophysical Year (1957-1958), U.S. Naval Construction Battalion personnel (Seabees) began building McMurdo Station during the 1955-1956 austral summer.
The
original plans for the station did not include a chapel; instead,
religious services were to be held in the station mess hall. However,
according to Admiral George Dufek, who commanded Deep Freeze I, “As
the construction of the buildings at McMurdo progressed a mysterious
pile of lumber, planks, nails, Quonset hut sections, and assorted
materials began to accumulate on a knoll overlooking the camp.”

The Chaplain, Father John C. Condit, and volunteers from the construction battalion gradually gathered enough materials to build what was to become the first Church ever erected in Antarctica. All of the work was done by volunteers after their daily duties were finished.
Admiral Dufek  noted: “The
men, after a hard day’s work, would drift over to the church site.
Before the main camp was finished a tidy neat church with a steeple was
to stand on a ridge overlooking the camp. Later it even had a bell,
procured from a small gasoline tanker.” 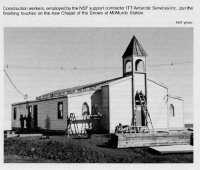 When the Chapel of the Snows was
completed, Father Condit had the world’s most southern parish. For 22
years this simple building provided a place of worship for personnel not
only at McMurdo Station but also from nearby Scott Base.

Two
excellent Antarctic Journal articles document the history of this
structure, and its replacement after the 1978 fire that destroyed it… (From the December, 1978 issue…

Chapel of the Snows destroyed).

On 22 August 1978, a
fire, believed to have begun in one of the buildings heaters, broke
out. The fire began in the rear heater room of the building about 5 a.m.
The fire crew fought the blaze successfully in the interior of the
chapel, but a sudden flare-up indicated that the fire had spread between
the interior and exterior shells along the top of the building. The
crew moved outside, but despite their efforts, fire soon engulfed the
structure, the flames covered the entire chapel.

Fearing
that the fire would spread to the adjacent structure, Building 108, or
destroy the communications cables strung between poles near the front of
the chapel, the crew brought a bulldozer to the building and pushed in
its front. With the bulldozer, they isolated sections that were still
burning and dumped snow on them to keep sparks from flying in the
breeze.
By 7:40 a.m.
the fire was under control but the chapel was destroyed. When the roof
of Building 108, adjacent to the chapel, began to smoulder, volunteers
shovelled snow onto the roof and sides of the building to protect it
from damage. A front-end loader finally knocked down the rest of the
chapel and pushed the rubble away from the cables and Building 108.
Only
a few religious objects , all damaged, along with the chapel bell were
recovered from the rubble, otherwise the building and all its contents,
including historic memorabilia from Deep Freeze One and subsequent
winter crews, were a total loss.

Thanks and credit to the following web sites and to the writers of this articles from which we did take part of this notes.