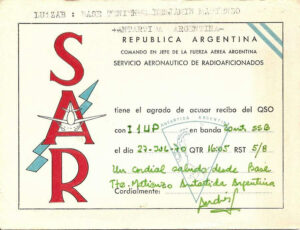 Matienzo Base  64° 50’ South, 60° 07’ West (Base Aérea Teniente Benjamín Matienzo)  WAP ARG-Ø1 is one of the Argentine Antarctic Base and scientific research Stations named after Lieutenant Benjamin Matienzo, an Argentine aviation pioneer. The Base is located in Larsen Nunatak one of the Foca Nunataks, in Graham land , Antarctic Peninsula. Matienzo is one of 13 research bases in Antarctica operated by Argentina.

From 1961 to 1985 it served as a permanent base; since then it is open during the summer season only. The Ham Radio Callsign was LU1ZAB 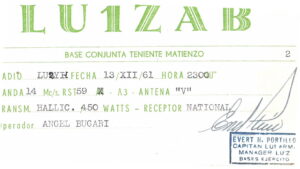 WAP-WADA Antarctic Directory,  lists almost all of the Bases,  Camps, Huts and Refuges known in Antarctica and on the Peri-Antarctic regions.

WAP-WACA Directory lists about 4,500 callsigns used in Antarctica since 1945. 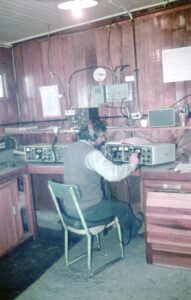 After the kitchen, the Radio Station was our second meeting place. While in the first one we met to fraternize, make comments, tell jokes and have a few bitter ones enjoying the occurrences of our cook, the Radio Station was the obligatory point of attendance to listen and find out the latest news and communicate through the networks established to make official links and also to get in touch with our loved ones.

Who were neophytes in this discipline and specialty, did learn the secrets and tricks that the responsible  of the Radio room used to secure the connections fighting with the noises of the ether and band openings according to the time of the day, the distances between correspondents and the geographical location of the chasers and Dxers, taking advantage of the technical virtuosity of those, that among the Team  were operating  radio equipments,  we could hopefully listen to some Argentine and foreign radio stations, thus learning about the news of the day and how the world worked.

In the 80s,  thanks to these great guys, we could work almost all the  Argentine Antarctic Station  on HF bands, then decades after decades  with the  advent of new technologies such as satellite,  internet and digimodes, the emotion of a DX contact in SSB  and CW with Antarctica,  has became a rare event …