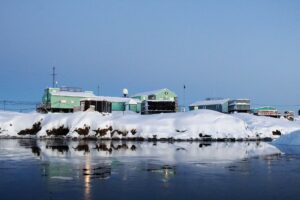 Bohdan Havryliuk, a geophysicist from Kharkiv, is the team’s leader. This is the ninth annual expedition for him. Before that, the maximum number of winters spent at the base by one person had not exceeded eight. Bohdan is also the oldest team member and he will celebrate his 49th birthday at the station.

In total, the expedition includes 12 participants: 7 scientists, a doctor, a cook, a diesel engineer, a system mechanic and a system administrator. Of these, 11 men and one woman, a biologist Oksana Savenko, is going to the Base for the second time. This is also a record as no other woman had wintered twice before.

Polar explorers will study the climate, living organisms, the structure of glaciers, the formation of precipitation and monitor the level of ozone in the air. The team also plans to explore the “languages” and “dialects” of whales, recorded using hydrophones.

Thanks and credit to: http://kharkivobserver.com/kharkiv-geophysicist-leads-ukrainian-expedition-to-antarctica/

With regret, Ham radio community worldwide chasing DX and collect QSLs from Antarctic Bases, will miss to contact Vernadsky Station  WAP UKR-Ø1 on HF! As far as we know, no Ham radio operators are this year among the Team!