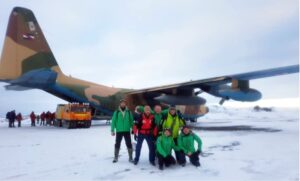 The adventure of the 29th Bulgarian  Antarctic Expedition started late due to a sequence of facts: The Spanish ship Esperides, which was scheduled to arrive at Livingston Island, did not sail from Spain at all, due to cases of Covid-19 of some of the crew. After twenty days of strict quarantine in Punta Arenas (each of the six Bulgarian guys was alone in a hotel room with food delivered to the door), the other Spanish ship, the Sarmiento de Gamboa, carried the group before the closure of the Spanish Base Juan Carlos I (WAP ESP-Ø1). The Chilean icebreaker Aquilez, which was scheduled to carry the Bulgarians from Livingstone Island at the end of March, was also quarantined due to Covid testing positive for some of the crew.

At the end of the season, before the onset of polar winter, there were practically no ships in the area of the South Shetland Islands. Prof. Pimpirev (doyen of the Bulgarian Antarctic Program) made contact with the Chilean Antarctic Institute, the polar ship Lautaro  went to take the group, threatened them with hibernation, without supplies of food and fuel, to the largest island in the area, King George, where there are several year-round bases and an airport. “Despite logistical problems, the expedition was able to complete all planned

activities. Damage to facilities and buildings on the base caused by high winds during the time when no one was on the base was repaired and it was conserved for the coming winter. The site was prepared for the construction of the new laboratory block, a special hangar was built for the incinerator, which burns the waste ecologically, and all the data were taken from the year-round scientific equipment, which records climatic, seismic, mareographic and glaciological events, in the area when the base is not inhabited”  said Prof. Dr. Hristo Pimpirev, head of all Bulgarian polar expeditions and director of the Bulgarian Antarctic Institute.

In Punta Arenas the  polar explorers have not been under quarantine, their return to Bulgaria is expected on April 19. 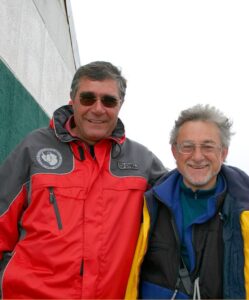 Prof. Hristo Pimpirev,  together with Javier Cacho, a Spanish scientist physicist , recently received the “Unifier of Cultures” award in the eighth “Worlds and Colors” contest, organized by the Association of Spanish speaking Journalists in Bulgaria. (pic to the left)

Javier Cacho is one of the first researchers of the ozone hole. He was the base commander of the Spanish polar Station “Juan Carlos I” on Livingston island. He is also a famous writer and several of his Antarctica books have been translated into Bulgarian. The “Worlds and Colours” awards are given to journalists, artists and intellectuals for their overall contribution to the rapprochement between the cultures of Bulgaria and the Spanish-speaking world. Due to the epidemiological situation, the award will be held as an online event until the end of April.