The plan is to sail for Bouvet Island on January 13, 2018.  Depending on the winds and sea conditions, it will be a 10 to 12-day sail to Bouvet.  The earliest arrival date will be January 23. Time to get ashore is weather dependent. As soon as the wind, sea conditions and visibility allow, the Team will begin helicopter flights to the island. Their Amateur radio license, also originally issued in 2007 with the call sign of 3YØZ, has been renewed and will be used during  the  DXpedition.
See  https://www.bouvetdx.org/news-and-updates/

A permit will be issued to land on Slakhallet, the huge glacier that covers the island at  54° 25′ 15″ South, 03° 23′ 35″ East . Slakhallet is a slope (elevation of 327 meters) within Cape Lollo and Cape Meteor and also close to Posadovsky Glacier. 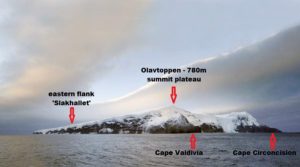 Bouvet lies at 54° 25’ South and Ø3° 22’ East. It’s the product of a volcanic eruption that last occurred in 4,000 B.C.  Bouvet is 97% ice covered, and with surrounding rocks and small islands, has an area of 19 square miles, with 18.4 miles of coastline.  Its location, ice, rock cliffs, high seas, harsh climate and surrounding pack ice and icebergs isolate it from human presence.  Jean-Baptiste Charles Bouvet de Lozier first saw the island in 1739. 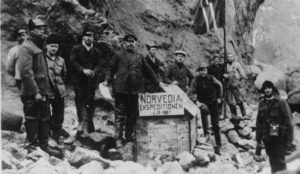 The island was not seen again until 1808.  There was a disputed landing by Benjamin Morrell. But, the first documented landing was by the Norvegia expedition in 1927, which named the island Bouvetoya, and claimed it for Norway.

Sometime between 1955 and 1958, a landslide occurred, creating a rock-strewn, ice-free area on the northwest coast.  The area was named Nyroysa (WAP NOR-Ø2), and subsequently became a Norwegian scientific and research site, which was decimated by an earthquake in 2006.  A new research facility was erected in 2014.

Bouvet became a Nature Reserve in 1971.  Several weather stations have been placed on the island, and a number of Norwegian expeditions have visited the island in the last 50 years.

When it will be official that 3YØZ did set a Camp at Slakhallet Glacier , a new WAP reference  will be given