“Victoria Land Permanent Base” (Weiduoliyadi changnian zhan) is the actual working name of China’s  new Base. 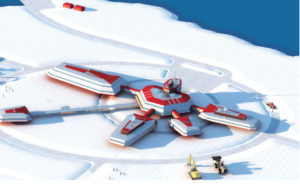 China’s fifth station is designed to be a year-round research base which could accommodate 80 people in the summer and 30 people in winter. The new base will provide year-round support for  researchers conducting tasks such as observations of land, ocean, atmosphere, ice shelf and biology, establishment of an observation and monitoring network in the Antarctic, and survey of marine environmental protection. 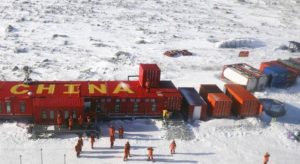 n February 7, 2018, during China 34th Antarctic Expedition, Chinese researchers laid the foundation and started to build its fifth Antarctic Research Station  on Inexpressible Island transferring large engineering equipments from China’s research icebreaker Xuelong. It is expected that full construction will be completed in 2022.

China has therefore opened its fifth Antarctic research station on Inexpressible Island in Terra Nova Bay, near the western shore of the Ross Sea, about 390 km Northwest of McMurdo(US) and Scott Base(NZ), 26 km from the Italian Base Mario Zucchelli (MZS) and Jang Bogo Station (South Korea).