The Artigas Antarctic Scientific Base was visited last Thursday by the Estonian delegation, headed by the country’s President, Kersti Kaljulaid, within the framework of the 200th Anniversary of the Imperial Russian Navy expedition. 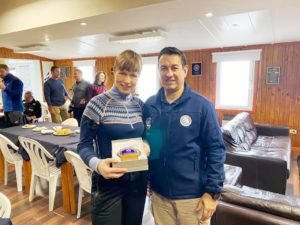 The freezing Antarctic morning, covered by a mist that made almost impossible to see beyond a few meters towards the horizon and fully covering the Collins Glacier did not prevent the President of Estonia, to visit the cold continent and stop at the Uruguayan  Antarctic Scientific Base-Artigas (WAP URY-Ø1).  After a warm reception by the Uruguayan staff that, in few minutes, made the visitors forget the cold, Uruguayans and Estonians shared a welcome breakfast with typical Uruguayan products.

The president of Estonia, Kersti Kaljulaid, did invite the members of the XXXVI Artigas Antarctic Campaign to come on board the 24 meters Dutch-built ketch sailboat Admiral Bellingshausen. The ship sailed off from Tallinn  harbor (Estonia) late on Sunday, July 2019 heading to  Antarctica. The long-planned voyage will be devoted to the 200th Anniversary of the discovery of Antarctica, and its ice shelf, by Fabian Gottlieb von Bellingshausen a Baltic German from Saaremaa, at the time Captain in the Imperial Russian Navy.