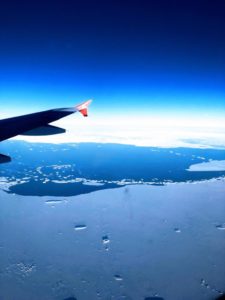 IAØ/IK5SQX-IAØ/DK5SQX Concordia Station WAP MNB-Ø3
Marco is in Antarctica now. He sent a picture showing the plane flying on the Icy Continent (See picture received from him). Marco did land at the Australian Casey Base;  at the moment he should be already at Concordia Station. Marco promised to let the chasers know when he can operate  (he expects to have some spare time to operate). He’s in Antarctica to install a LIDAR (Light Detection And Ranging) system but

ZS7ANT Whichaway Camp WAP MNB-11
Oleg has been reported operating on 30 & 40 meters bands. No ways to reach him so far  in order to set skeds; see what we can do shortly.

8J1RL Syowa base WAP JAP-Ø3
Operator in active on Digi modes only. QSL via Bureau or direct to JG2MLI

ZL5A Scott base WAP NZL-Ø1
ZL4ASC Adam Campbell was last reported working FT8 on sept-2019. No more info since then.