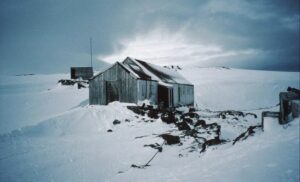 The British established Base W on Detaille Island in 1956, intending to use it to launch dog-sledding expeditions across the ice to the Antarctic Peninsula, and conduct geologic and meteorologic research.

Antarctic explorers unearthed a “spooky” abandoned British Refuge Base on the icy continent after its last occupants are said to have fled more than 50 years ago.
Speaking during his Amazon Prime documentary “Terra Antarctica” Award-winning filmmaker and author Jon Bowermaster,  did  reveal a  forgotten building on Detaille Island.: «I went ashore to have a look at an old British refuge hut, this one is known simply as Camp W, untouched since its last occupants ran out more than 50 years before»,  he said. 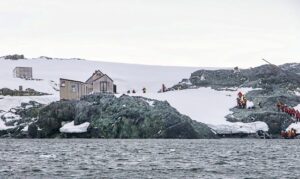 Jon Bowermaster  talks about an old British supply depot on Detaille Island (WAP GBR-26), that hasn’t been occupied for more than half-a-century.

VP8CC was active on HF from Base W long ago (1958-59) and nobody else put this rare spot on the air since then. Thanks the great efforts by Mehdi F5PFP,  who did activate this “spooky” site 10 years ago (6 march 2011) today we are aware to have made a contact with something very, very rare. 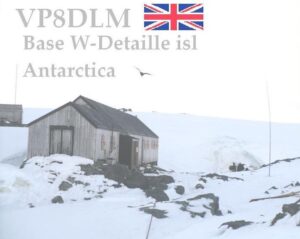 The British Antarctic Survey (BAS) is the national operation running in the frozen desert and is part of the Natural Environmental Research Council. With over 400 staff, BAS takes an active role in Antarctic affairs, operating five research stations, two ships and five aircraft in both polar regions, as well as addressing key global and regional issues. This involves joint research projects with over 40 UK universities and more than 120 national and international collaborations since a small expedition established a permanently occupied base on the continent during World War 2.