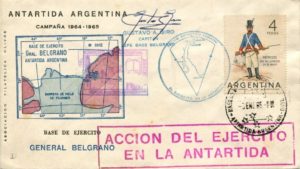 Base Antarctica Belgrano I  was located on Piedrabuena Bay on the Filchner Ice Shelf at  77°46’ South, 38°11’ West.  At the time of its inauguration in 1954 it became Argentina’s southernmost permanent base. It was shut down in 1980 over safety concerns due to it being built on increasingly unstable ice, which endangered both personnel and equipment.

A new, larger replacement base was established further south, and named Belgrano II (WAP ARG-Ø6) followed by Belgrano III (WAP ARG-Ø7) which became the southernmost of the three.

Brief history of Base General Belgrano I: 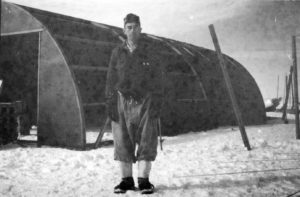 On 18 November 1954 the Antarctic Naval Task Force commanded by Capt. Alicio E. Ogara  (see picture below ) sailed from Buenos Aires with the objective of setting up a base on the Filchner Ice Shelf that would serve as a launch point for expeditions to the South Pole.
On 2 January 1955 the expedition sailed up to the southernmost point of the Weddell Sea at 78° 01′ South. At the time it was the highest austral latitude ever reached by boat, and a new world record was set.
The task force then sailed north along the ice wall, seeking for an anchoring place.

On 3 January 1955 Brig.Gen. Hernan Pujato, director of the Argentine Antarctic Institute, flew over the ice shelf area aboard a helicopter to choose a suitable place to mount the base, selecting a small cove where the high wall of ice sloped down to 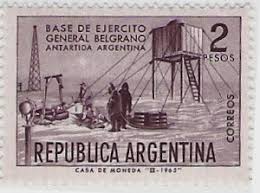 the sea. The unloading of the materials, equipment, tools, instruments and consumables was conducted from ARA General San Martín. The team built a main house, four quonset huts, food stores and hangar. They left on the new base enough fuel for three years.

Belgrano I (WAP ARG-Ø5) was shut down after 25 years of continuous service due to the fast deterioration of the ice barrier it was sitting on; new often hidden cracks and crevices endangered the on-duty personnel and material. The Base was closed on January 1980 and all of its staff and equipment were evacuated by helicopters operating from the Icebreaker ARA Almirante Irizar.