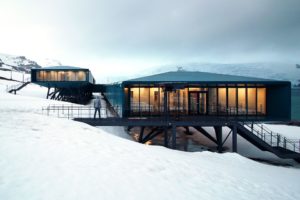 The modular research facility, located in King George Island in the Keller Peninsula, has been designed by Estudio 41, the Brazilian project houses labs, operations and living quarters, and could be mistaken for an art museum or boutique hotel
Representatives from Brazil’s scientific community and government will head to Antarctica this month to inaugurate its new Comandante Ferraz Research Station (WAP BRA-Ø2), which replaces a facility lost to fire in 2012.
The base with the loss of two lives was destroyed by an explosion in February 2012, caused by a fire which raged through the compound where marine research work is carried out. Apparently the fire started in a machine room housing energy generators before destroying the entire station, which had been built in 1984. Fifty-nine people were stationed at the base on King George Island when the fire broke out.

The coolest architecture on Earth is in Antarctica is really represented in the  two low-slung buildings, designed by Estudio 41, a Brazilian architecture firm, house laboratories, operational support and living quarters – and could be mistaken for an art museum or a boutique hotel.

Throughout the 20th Century, architecture in Antarctica was a pragmatic, largely makeshift affair, focused on keeping the elements out and the occupants alive. In 1959, the Antarctic Treaty dedicated the continent to research. Since then scientists have come in growing numbers, with ever more complex needs. Construction in Antarctica, long the purview of engineers, is now attracting designer architects looking to bring aesthetics – as well as efficiency, durability and energy improvements – to the Earth’s coldest neighbourhood. “As architects, we are concerned with human comfort, so we set out to create a kind of atmosphere that would promote well-being,”  said Emerson Vidigal, a principal at the firm.

Let’s hope that now, as in the past,  the Ferraz Base (WAP BRA-Ø2) will also be a chance for radio operators to be active on HF Ham bands to share with the world, the voice of this corner of the Icy Continent.