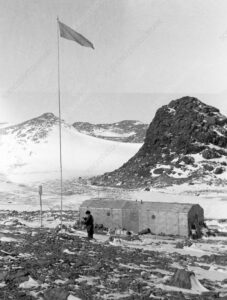 Oasis Research Station 66°12’28” South, 100°45’00”East,  was built by the Soviet Antarctic Expedition  in 1956 and named Oazis (Оазис). The station has been visited periodically by Polish and other research teams. Official classification of the station is “inactive”. The station is only occasionally visited by tourists.
Picture aside shows the Research Station Oasis photographed in 1958 during the 3rd Soviet Antarctic Expedition of 1957-59.

The station was located in the east of Antarctica on the edge of a dry valley. Photographed in 1958.

As far as we know, nobody has been active for this old epic Russian Station. It will be interesting to know if someone have evidence of Ham radio operation from there, in this case a WAP reference will be given for sure.

The Station has been  handed over to Poland in 1959, who renamed the facility as  A.B. Dobrowolski Polar Station.