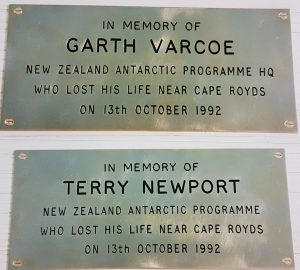 Antarctic New Zealand  reports that today,  oct. 13 2021,  Scott Base observed a few minutes of silence to remember two of our own. Kiwis Garth Varcoe and Terry Newport were tragically killed in a helicopter crash in 1992 while returning from a maintenance trip to the Hut at Cape Bird.

The team gathered today at the flagpole, where the men’s names are commemorated on a plaque, to reflect on their contributions to Antarctica. 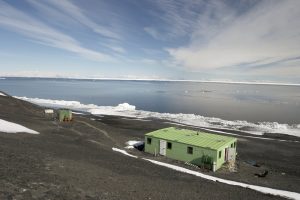 The hut, which could accommodate six people, was built at Scott Base (WAP NZL-Ø1) during the winter and lifted by helicopter to Cape Bird. The shelter was then rebuilt in 1991 nearby the old one designated, in the meantime, as Antarctic Special Protected Area, ASPA 116.

On the side of the newest Hut there is an other small service shelter. The main Hut wich can guest 8 people,  is equipped with a kitchen with propane stove and freezer, has a central heat from a diesel-burning  system. Its front windows look out over McMurdo Sound and the Ross Sea. 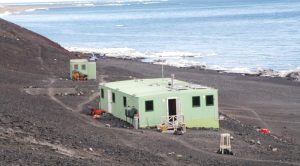 Years ago, for us Radioamateurs, it was quite easy to work the New Zealand Scott Base on HF and it was a fantastic experience for many of the lucky Hams. On the last years, nobody was able to be active from there!

Many of the very interesting sites, such as Huts, Refuges, Field Camps  are still waiting someone to operate from there. Cape Bird Hut is frequently visited during the Austral summer season by researchers who are going to stay there for a little while. As far as we know no activity on HF have been performer from this site … a real shame!

Hopeful and sure to interpret the desire of the thousands Radioamateurs around the worl, let’s say that the best dream at WAP, is that the Radio becomes as, it once was, an instrument of union between people and for us Radioamateurs, that the voice of Antarctica returns to be heard al lover the world.