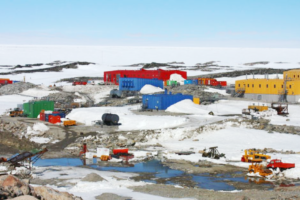 Casey Station (WAP AUS-Ø2) is significant as a transport hub for the Australian Antarctic Program, with the introduction of intercontinental jet flights for scientists and operational staff from Hobart to the Wilkins Ice Runway (WAP AUS-NEW), 65 kilometres (40 mi) inland from Cas

ey Station. The inaugural landing of the AAD‘s Airbus A319 aircraft was on the evening of  December 9th,  2007.
A video of  Wilkins runway is available by clicking on the gif aside: