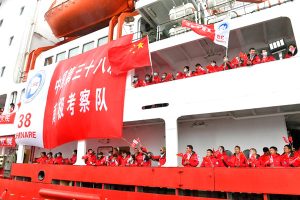 China’s research icebreaker Xuelong, or Snow Dragon, set off from Shanghai on on Friday Nov 5, marking the start of the Country’s 38th Antarctic expedition.

Hydrological, meteorological and environmental investigations in the South Pole, and monitoring of new pollutants such as microplastics and drifting garbage in the Antarctic Ocean will be carried out during this scientific expedition.

The first batch of 154 researchers on the ship will return to China in mid-April next year.

The WW Ham Radio community has always  searched  QSOs  with the Chinese  Research Stations in Antarctica as a friendly way  to mark the spirit of peace the Antarctic Treaty.

Several  Countries  have a Club station in their Antarctic Bases and for sure, Ham Radio is a wonderful  way to  test  ionospheric propagation  as a branch of the physical research. For us, Radioamateurs, a contact in HF (SSB or CW)  with Antarctica is always  s great goal!
… that’s  to say that … we hope, one day or another, to make HF contacts , with at least one of the Chinese scientific  Bases in Antarctica, operated by a Chinese Ham… that will be great!