The “Capilla Cristo Caminante”, is located up in the hill behind San Martin Station (WAP ARG-Ø8). The pics aside show the closest shots of the Chapel of which, so far we do not have better visualizing.

San Martin Base was inaugurated on March 21, 1951 by then Colonel Hernán Pujato, being at that time the first Argentine continental scientific Base and southernmost establishment in the world. From that moment on, the Base’s weather station provided indispensable records and forecasts for navigation in the waters adjacent to the Antarctic Peninsula. 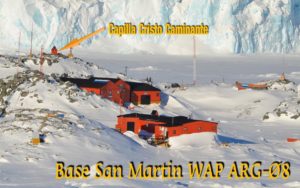 As of March 21, 1976 with new facilities it was called San Martín General Army Base until in the 1990s its name was modified to San Martin Antarctic Base or San Martín Base.

Father Pablo Daniel, Caballero Karanik who did visit the Chapel  in the fifth summer campaign to addresses spiritual assistance and responding to the request of the Bishop for the Armed Forces and Federal Security Forces. (Obispado Castrense de Argentina), Mons. Santiago Olivera said: 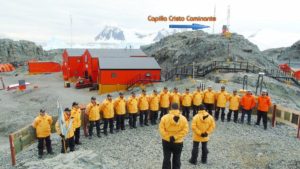 “I could be at the San Martín Base, and  I was in the Cristo Caminante Chapel, a Holy place where in the last 10 years there wasn’t  a Chaplain, to make a prayer for the incoming seasonal Team ”