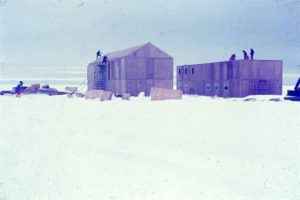 Indian Antarctic Program did start in 1981 with the first Indian expedition to Antarctica, a huge geo-political achievement. Dr. S Z Qasim, Secretary of Department of Environment and former Director of NIO was selected as the leader of the 21 member Team.

The expedition left Goa on December 6, 1981, on board M/V Polar Circle, a chartered ship from Norway. They landed in Antarctica on January 9th , 1982 and returned to Goa on February 21st , 1982, thus marking the end of their 77-day expedition 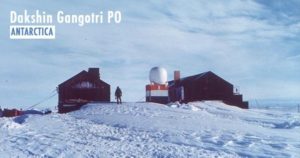 carry out scientific work Dakshin Gangotri was built in eight weeks by an 81 member Team. With help from the Indian army they did  complete the construction in January 1984.

January 26th , 1984, India’s Republic Day was celebrated at the station along with Soviet and East German scientists

Dakshin Gangotri was decommissioned in 1990 after it got half buried in ice. It is now marked as a historical site.

Shortly before the first station Dakshin Gangotri Station did bury in ice and abandoned in 1990/91,  an India’s second permanent research station in Antarctica (Maitri Station WAP IND-Ø3) was built and finished in 1989.

Maitri Base is situated on the rocky mountainous region called Schirmacher Oasis. India also built a freshwater lake around Maitri known as Lake Priyadarshini.  The research station is only 5 km away from the Russian Novolazarevskaya Station and is equipped to carry out research in various disciplines, such as biology, earth sciences, glaciology, atmospheric sciences, meteorology, cold region engineering, communication, human physiology, and medicine.