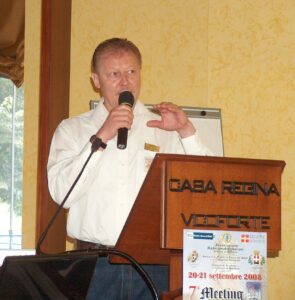 These two forgotten Huts  and a Refuge will be inserted into WAP-WADA Directory which, day by day becomes more and more accurate.  Even if these Huts and Refuge have been dismantled and removed, it will be great to document their existence. 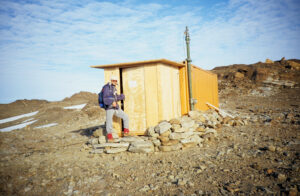 Lake Podprudnoye Hut, (WAP DDR-NEW) Built in 1987, this Hut  shown on the right, was a living container which was placed at that site as,  at that time it was considered to build a new Georg Forster  Station nearby. Later this plan was cancelled.
The Hut was located at  70°46′ South,  11°37′ East,  close to  Podprudnoye Lake.
(the two Pics to the Right,  show the hut on its positions on Podprudnoye.  The man  near the hut is Volker. Pictures were taken from different angles) 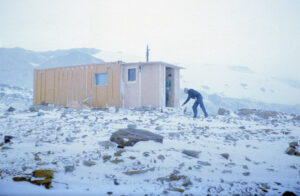 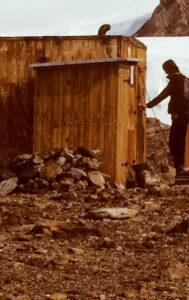 A decision decision to join Lake Podprudnoye Hut with the other hut moved from Lake Prilednikovoye was taken in the Antarctic summer season 1988-1989 .

Old hut from the Lake Prilednikovoye was relocated and combined with the hut existing at the northern coast of the Lake Podprudnoye.  Both Huts together were called “Domik” (hut in Russian language) , they were set at  70°46′ South,  11°37′ East.. 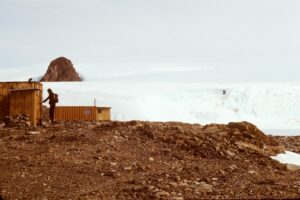 Picture aside shows both huts together.

Lake Podprudnoye Hut (at his second  and last setup) was though formed by both  the huts present in that area:  the one  moved from Lake Prilednikovoye  and  the Hut already  in place at Lake Podprudnoye.

A detailed map below,  show the locations of both Lake Podprudnoye and Lake Prilednikovoye 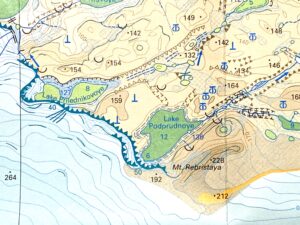 Volker DL8JDX wrote: «These huts  were used as small support base for the scientific activities in the western part of the Schirmacher Oasis. Because this area of the Oasis could be explored only by foot,  it was good to have a shelter to work and sleep apart of the main Station».
Volker said that there were no Hamradio activities from these two huts, just VHF and HF radio traffic to the Georg Forster main station and neighboured bases even if  «I was myself working and sleeping in the “Domik” at lake Podprudnoye between 1988 and 1992 several times».