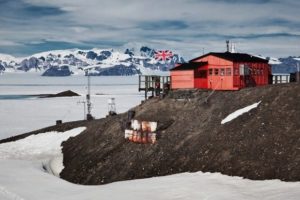 Fossil Bluff lies at the foot of a scree-covered ridge overlooking George VI Sound, which separates mountainous Alexander Island from Palmer Land.This small base located at 71° 20′ South, 68° 17′ West, was established on Alexander Island in 1961 with the purpose of Survey, geology, glaciology and field geophysics. This advanced station, occupied during the winters of 1961, 1962, 1969-75, supplied overland for field parties from Stonington Island (Station E) WAP GBR-Ø5, Adelaide  (Station T) WAP GBR-13, and Rothera (Station R) WAP GBR-12. It was closed for the 1976 winter when Rothera (Station R) became fully operational, and now is  a forward logistics facility with skiway

Fossil Bluff it is about 225 miles south of Rothera, with summer-only occupation since 1975, the bluff is a collection of 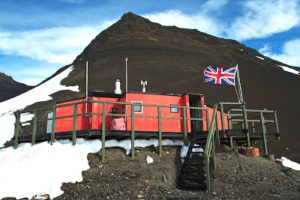 buildings and facilities, at the centre of which lies the main hut, named Bluebell Cottage, houses four people in comfort and forms a transit station for summer field parties
The base is operated by Twin Otters from Rothera station (90 to 110 minutes flight)  during the Antarctic summer season as forward fuel depot, facility for re-fuelling aircraft and field station for parties from Rothera (Station R) during austral summers. Site was cleaned-up by BAS during the 2002/03 and 2003/04 seasons.