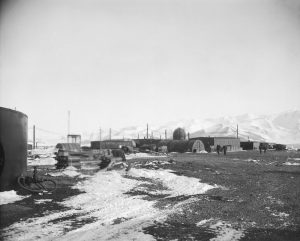 Cape Hallett 72°19’ South, 170°16’ East,  was the location of a joint scientific base, Hallett Station, between the United States and New Zealand during the International Geophysical Year of 1957, and was manned permanently until 1964, when there was a major fire.

Hallett Station  was then used as a summer only base until 1973. The site is currently being remediated by removing hazardous materials: fuel, and oil stored in several large tanks. This is an ongoing project which will take several years to complete. 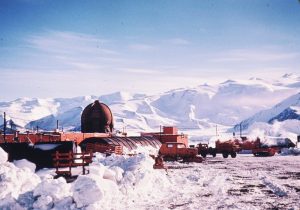 At the time, thirty Navy men and scientists were stationed at a “rookery” near Hallett Station from October through February to study the over 100,000 Adelie penguins which populate the area. These birds, 18 inches tall and weighing 14 pounds, return annually to breed and raise their young. An area of 74 ha, is protected under the Antarctic Treaty System as Antarctic Specially Protected Area (ASPA) No.106 because it contains habitats with a rich and diverse range of plant communities that are the most extensive and representative examples known at the northern end of the latitudinal gradient of Victoria Land and the Ross Sea. 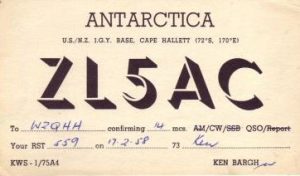 The only activity known from Hallett Station (WAP MNB-Ø8) was ZL5AC Ken Bargh (QSL aside)  who did operate from there in 1958 but also, on WAP-WADA Directory there is another ZL5AC but from Scott Station (WAP NZL-Ø1).

Now thanks to a couple of Antarctic veteran, Volker Strecke DL8JDX and Alan Cresswell ZL2BX,  WAP is proud to retrace a bit of that time, about this ZL5AC’s twins.
In a message sent to Volker DL8JDX, last Febr.3rd,   Alan Cresswell ZL2BX (alancresswell@xtra.co.nz) wrote: -With regard to ZL5AC, I was in the Antarctic in 1974.  Firstly at  the New Zealand research station at Scott Base,  and then at the American Byrd Station on the Polar Plateau. My operating was restricted to visits to Scott Base as I was unable to operate from Byrd Station so,  I only managed a few hundred contacts. Most of my operating outside NZ was done  in my time in the Pacific Islands (ZK1AM, ZK1DR) where I had over 100.000 contacts. 73, Alan ZL2BX-

Perhaps some Old Timers/Antarctic Veteran might recall some rare memories of that frame of the Antarctic era and help WAP to know a bit more.