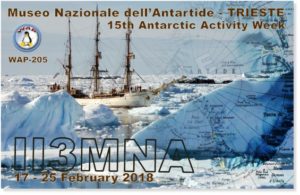 The Antarctic  museum of Trieste (Italy) is  located in San Giovanni compound, under the aegis of Trieste University, Department of Geology.

Among Its objectives,  the conservation, study and enhancement of Antarctic materials relating to the marine geology and marine geophysics research fields, as well as of the history of the explorations of the continent.

The Documentation Centre currently holds a rich collection of items relating to Antartica’s geology and marine geophysics, approximately one hundred historical texts and the maps used in exploring this continent.

Trieste exposition is organized in a surface of 600 sq. meters, where valuable collections, attractive sceneries and multimedia products, underline current scientific subjects, like climate change, anthropic impact on the environment, biodiversity and space research. This Museum is divided in three sectors: the first one is devoted to Antarctic historical cartography, including valuable ancient maps; the second sector is dedicated to the conquest and exploration of the Antarctic continent, highlighting the three pioneers, protagonists of the most difficult adventures of the world: Scott, Shackleton and Amundsen; the third and last sector is focused exclusively on the Italian expeditions from the 900’s until nowadays organized and realized by “Progetto Nazionale delle Ricerche in Antartide” (PNRA).

The activity of diffusion and divulgation of the Museum targets mostly a scholar public, students on different levels of instruction, and a wide public. Interesting information which awakes public’s interest on extreme environments, conservation and preservation of natural environments are exposed. The visits to the Museum can be chosen between individual visits or visits accompanied by guides and/or by the Museum’s researchers.