At the beginning of 2017, Juan Manuel Pereda, LU4CJM has been part of the Argentinean Team operating from Base Carlini (WAP ARG-2Ø) in Antarctica.. During his stay he did operate Ham radio (mostly CW) as LU4CJM/Z from Albatros Refuge (WAP ARG-27), Gurruchaga Refuge (WAP ARG-28) and of course, from Carlini Base, LU1ZI, as follow: 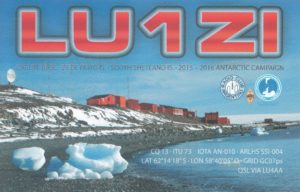 Carlini is a permanent Antarctic Scientific Station, located at 25 de Mayo Is. (aka King George Is.), in the South Shetland Islands. It is operated and administrated by the National Antarctic Division (DNA) of the Foreing Affairs Ministry of Argentina.

The Argentinean Antarctic Institute (IAA) develops and supervises all scientific programs. The base was established on February 12th 1982 under its former name, Estación Científica Teniente Jubany, after the primary shelter built in 1953.

At Potter Cove, near the base, are located the Albatros and Elephant Refuges; both depend on Carlini Base.

Three Brothers Hill (210 m), Yámana nunatak and Fourcade glacier can be seen from the base. Climate at South Shetland is a little less tough than the rest of the Antarctica. In summer temperatures are around -2°C and 3°C; and in winter are between -10°C and  -20°C. In 2007, a temperature of -26ºC was registered. 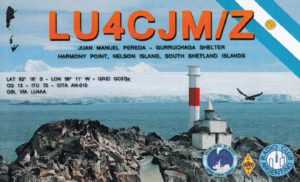 Francisco de Gurruchaga Antarctic Refuge (62°14′ 03″ South,  59°10′ 02″ West)  built on Dec. 15, 1954 is placed in Harmony Point, Nelson Island, South Shetland Island. The administration depends on the Argentinian Naval Army.  Proposed by Argentina, this area was originally designated as Site of Special Scientific Interest No. 14 under Antarctic ATCM Recommendation XIII-8 (1985),  because the Area is an excellent example of the maritime Antarctic communities of birds and land ecosystems present in South Shetland Islands, making possibilities to carry out long-term research programs without damage or harmful interference. 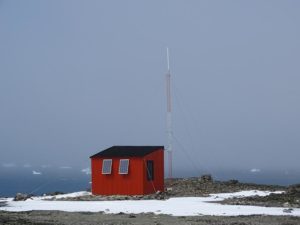 Antarctic Refuges are facilities open to all countries, to be used in emergencies or to support activities in the field. They are equipped with provisions, fuel, generators and communications equipment, accommodation facilities and other logistics.

The shelter houses analogue/digital VHF repeater with a coverage of more than 35km. Powered by solar energy provides telecommunication support to all scientific and logistic personnel in the field, allowing the geolocation in real time.

Thanks to Juan Manuel Pereda, LU4CJM/Z for his great operation and thanks to LU4AA (Radio Club Argentino) for such a nice QSL cards just received and the excellent QSL Service.