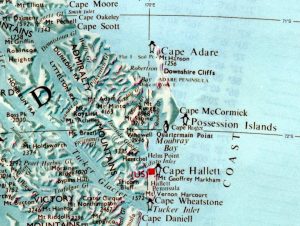 Cape Adare is a prominent cape of black basalt forming the northern tip of the Adare Peninsula and the north-easternmost extremity of Victoria  Land, East Antarctica and an important landing site and Base Camp during early Antarctic Exploration.

Cape Adare is the site of  Borchgrevink’s Hut, and  Terra Nova Expedition’s Hut where members of the Northern Party of Scott’s Terra Nova  Expedition over-wintered in 1911 and 1912. They also erected another hut, which has fallen into ruin today., This site have been designated a Histopric Site or Monument (HSM 22), following a proposal by New Zealand and the United Kingdom to the Antarctic Treaty Consultative Meeting. This site belongs and his administered by New Zealand.

As yet, there is no evidence of amateur radio activity being performed from this site,  so it remains listed on WAP-WADA Directory as  WAP NZL-NEW.

Map above show both Adare Cape  and Hallett Cape 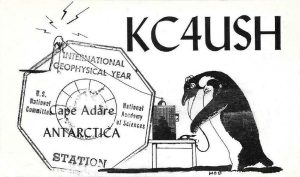 Cape Hallett, located 63 miles (101 km) to the South of Cape Adare, is a snow-free area on the northern tip of the Hallett Pensula on the Ross Sea coast of  Victoria  Land, East Antarctica.  he cape was the location of a joint scientific base, Hallett Station, (WAP MNB-08) between the United States and New Zealand during the International Geophisical Year of 1957, and was manned permanently until 1964, when there was a major fire. It was then used as a summer only base until 1973. 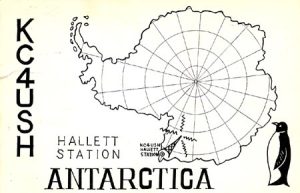 The callsign of Hallett Base (WAP MNB-08) was KC4USH; with several QSLs issued (See pics here aside); some of KC4USH QSL cards,  reports Cape Adare which was probably meant to be Cape Hallett. 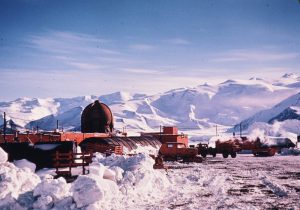 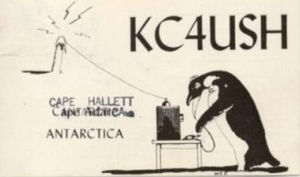 In 1899 the Norwegian explorer Carsten Borchgrevink sailed to Antarctica aboard the converted scaler Southern Cross. At Cape Adare, Borchgrevink and nine compan­ions built a Hut and established an expedition Base Camp. During the next six months, Borchgrevink and his team became the first men to overwinter on the southern conti­nent. A 28-year-old zoologist in the party died and be­came the first individual buried on the continent. When Borchgrevink returned to Europe in the spring of 1900, he had, in effect, started a race for the South Pole that would be won in 1911 by his boyhood friend, Roald Amundsen.

The site was revisited both by Robert Falcon Scott’s British National Antarctic Expedition (1901-1904) and by his Terra Nova expedition (1910-1913). Pic below show the Borchgrevink’s Hut 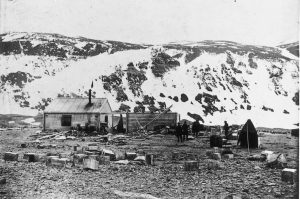 Members of the Northern Party of Scott’s Terra Nova  Expedition over-wintered at Cape Adare in 1911 and 1912. They also erected one hut, which has fallen into ruin today. The remains of two Borchgrevink’s Hut, as well as those of the Terra Nova Expedition’s hut, have also been designated a Histpric Site or Monument (HSM#22), following a proposal by New Zealand and the United Kingdom to the Antarctic Treaty Consultative Meeting.

Check page 154/157 for some mention of Cape Hallett/Adare

It was Norwegian explorer, Carsten Borchgrevink and his expedition team who started building the huts on 20 February 1899 on the remote site. The main Living Hut was constructed to house the expedition party along with a Stores Hut for their provisions. The party moved in a few days later, on 1 March, the day the Southern Cross sailed, leaving the men to spend several months in cramped, uncomfortable isolation. On 24 July 1899, it was lucky one of the buildings survived, when a candle set the hut lining alight. Later in the year, one of the men, Nicolai Hanson, suffered a debilitating illness, and died in the hut on 14 October 1899, becoming the first person to die on the Antarctic Continent.

When the Southern Cross returned for the party on 28 January 1900, the men started to dismantle the Stores Hut, removing its roof, with the intention of taking it with them to use elsewhere. However, they left on 2 February 1900 before completing this task and it wasn’t until 18 February 1911 that the Huts at Cape Adare were occupied again, following the arrival of Scott’s Northern Party (led by Victor Campbell). As well as erecting their own kitset wooden hut, they made good use of what was left of Borchgrevink’s encampment, covering the unroofed Stores Hut with canvas to make a storeroom, and utilizing the Living Hut as a gymnasium and darkroom.

Since the Northern Party’s departure from Cape Adare, there have been only sporadic visits to the remote site. New Zealand parties visited a couple of times during the 1960s and 70s to undertake repairs, before Canterbury Museum sent an expedition party to the site in 1982 to carry out maintenance work, complete drawings of the huts, and document the artefacts.

The first party from Antarctic Heritage Trust visited in 1990 and carried out significant preservation works to the huts. This focus continued on the Trust’s next visit in 2003, when condition reports for the artefacts were also completed.

More latterly, during the summer season of 2015–2016, a small team from the Trust spent two weeks at Cape Adare gathering close to 1500 artefacts from one of the huts and carrying out further repairs and maintenance. The artefacts were later conserved in Christchurch, and seven of these very special items now feature on the Trust’s AR App.

More links of Cape Adare at: