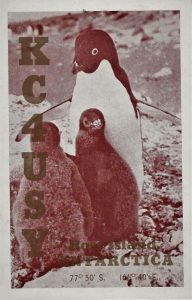 Anthony W Delprato, WA4JQS is an Antarctic veteran (WA4JQS – Callsign Lookup by QRZ Ham Radio )  and lots more … Thanks to his  precious help, we are now in a position to add another piece to the Antarctic history listed  in the pages of the WAP-WADA Directory.

Radio amateurs have been and currently are,  a primary help since the birth of WAP. Thanks to them we have been able to put in the Directory, many Antarctic sites brought “On Air” by radio amateurs.

This is confirmed today by this new entry KC4USY Ross Island Field Camp (aka McMurdo Sound) at 77°50’North, 166°40’East. 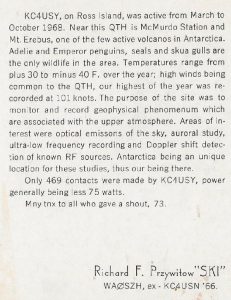 On the rear side of KC4USY’s QSL, we can read a note reported by Richard F Przywitowski WAØSHZ ,  Ski (WAØSHZ) was the operator of KC4USY:

KC4USY, on Ross Island, was active from March to October 1968.

Near this QTH is McMurdo Station and Mt. Erebus, one of the few active volcanoes in Antarctica. Adelie and Emperor penguins, seals and skua gulls are the only wildlife in the area. Temperatures range from plus 30° to minus 40° F. over the year; high winds being common to the QTH, our highest of the year was recorded at 101 knots.

The purpose of the site was to monitor and record geophysical phenomena which are associated with the upper atmosphere. Areas of interest were optical emissions of the sky, aurora study, ultra-low frequency recording and Doppler shift detection of known RF sources.

Antarctica being an unique location for these studies, thus our being there. Only 469 contacts were made by KC4USY, power generally being less 75 watts.

I was in a QSO with Willy Field one night when a crew member came into the shack and told the op to come outside. A penguin had walking into camp and Willy Field was 200 miles from the water. They backtracked his tracks and found another set of tracks just outside the camp that went around the camp. They followed them and found the lone penguin .  Both were put on a C 54 and flown out to the coast later that week. 73 Tony WA4JQS