WAP did receive a huge number of Antarctic QSLs by KI7ATZ  Peter Becker Ph.D  who has got a great experience when 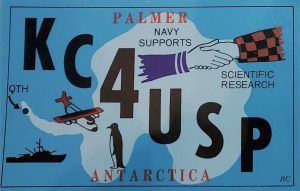 he was at the US Palmer Station for 5 months in 1970. Dr. Peter Becker  sent us a brief  comment of his experience down South:  «A Ham could operate on a “Station License”, then with no license. At the time,  Palmer Station (WAP USA-23) was KC4USP,  R/V HERO was KC4USN and Byrd Longwire Station (WAP USA_Ø3) was KC4USA. Notice that KC4USA ha salso been used by several other US Bases in Antarctica .

We did phone patches nightly for staff and Navy staff!  When not doing that we ran QSO’s for the popular Antarctic Station QSL seekers.

We had boxes of surplus Collins KWM 2A’s Transceivers with 1000 watt 30S-1 linear amplifiers… so when something stopped working, we just opened another unit!  We also had the USN Antenna Farm,  so we used what ever one they were not using,  in addition we were also allowed to use AFRS (Armed Forced Radio Service) bands and we spoke to friended in Okinawa and other SE Asia stations. 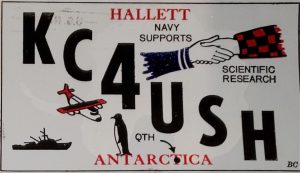 As a Polar Scientist, I routinely used it on Icebreakers in Polar Waters at both ends! The Palmer Trip was a joint NASA and NSF Office of Polar Programs as well as support for Dr. Steven Shabicas Doctoral work on Keyhole Limpets at Palmer.

I was active in polarscience from 1968 to 1998 and ran the Arctic Nuclear Waste Assessment the last 5 years while finishing my Ph.D. in 1995 in Physical Oceanography and then 3 more years as a Post Doc at Battelle MSL in Sequim, WA under DOE.. so many miles, many ice camps in both regions, and diving in both regions up to 1989.