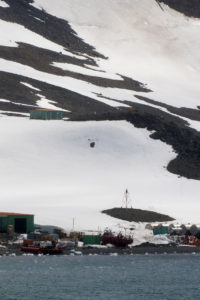 Located at 62° 5’ South, 58° 22’ West, Martel is an inlet forming the northeast head of Admiralty Bay on King George island, in the South Shetlands Islands, off Antarctica. It was charted in December 1909 by the Fourth French Antarctic Expedition under Jean Baptiste Charcot and named “Fiord Martel” after J.L. Martel, a French politician.

The square pyramidal skeletal metal tower with balcony and light of Martel Inlet Light House  (WAP BRA-LH ØØ1),  was constructed on a concrete basement in the year 2007 and   lies exactly at 62° Ø5’ Ø2” South, 58° 23’ 31” West.  Its markings / pattern is  red and white tower, red lantern  with a Focal height of 14 metres (46 ft),  with a Range of 10 nautical miles (19 km; 12 mi). Light is sourced by solar power . It is administered by the Brazilian Comandante Ferraz Research Base (WAP BRA-Ø2)

It was first activated in 1985 by ZXØECF.
Lighthouses in Antarctica and Peri-Antarctic areas are recently been included in the new  “WAP LH Award” among WAP-WACA & WAP-WADA, the two main Antarctic Awards.