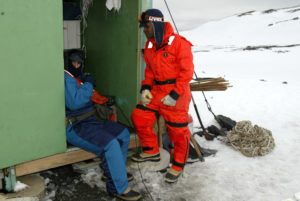 Refuge Emílio Goeldi  (WAP BRA-Ø5) is a Brazilian Antarctic summer facility on Elephant Island . It was named after the Swiss-Brazilian naturalist and zoologist Emil Goeldi. The structure, built in 1988, can accommodate up to 6 scientists for up to 40 days  and depends both logistically and administratively on Comandante Ferraz Station station  (WAP BRA-Ø2).

Elephant Island is an ice-covered, mountainous island off the coast of Antarctica in the outer reaches of the South Shetland. Its name was given by early explorers sighting elephant seals on its shores. It lies 779 miles west-southwest of South Georgia, 581 miles south of the Falkland Islands, and 550 miles southeast of Cape Horn. It is within the Antarctic claims of Argentina, Chile and the UK.

Hampson Cove on the south-west coast of the island, including the foreshore and intertidal area, contains the wreckage of a large wooden sailing vessel; it has been designated a Hitorical Site or Monument (HSM 74), following a proposal by the United Kingdom to theAntarctic Treaty Consultattive Meeting. 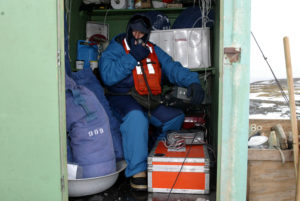 As far as we know, Emilio Goeldi Refuge (WAP BRA-Ø5) was only activated once, in 2004 by ZXØECF and ZXØGTI as documented  by the pic on the side.

WAP reference BRA-Ø5  was given to the Refuge,  after receiving the documentation from the kind operators:  Roberto Stuckert (PT2GTI/ZXØGTI) and Jorge Luiz Lunkes (PT2HF/ZXØECF)