We have chosen a couple of sites in Antarctica 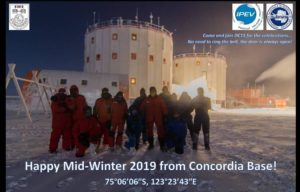 (Concordia Station WAP MNB-Ø3,  and Bharati Base WAP IND-Ø4) were the personnel  have shared  the happiness of June 21, better known as Mid Winter Day. 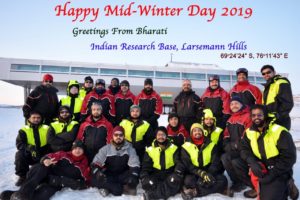 The first Midwinter’s Day was celebrated in 1898 by the crew of the Belgica, a Belgian vessel that became stuck in pack ice and was forced to overwinter until it finally broke free in February 1899. Unprepared to spend a winter in Antarctica, many of the crew suffered from scurvy, which was only alleviated after the men began to eat seal and penguin meat that provided essential vitamins.

Mid Winter Day is marked with a feast and other activities.

Below, the Artigas Base (WAP URY-Ø1) on the longest night on the planet celebrated during the “Day of the Antarctic Confraternity”.

This day marks the beginning of winter and festivities are traditionally held among the Antarctic bases  as “Mid Winter day” in order to motivate themselves to overcome the challenge of the rigor in this unique  geographical site!