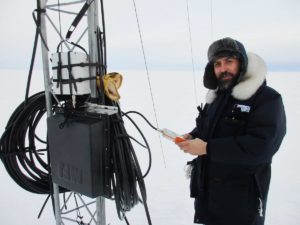 Matthias, DH5CW (Pic to the Left), and Felix, DL5XL (Pic to the Right), will be active from Neumayer Emergency Base (also known as SANAP Summer Base, WAP ZAF-11), Grid Locator IB59uj, from January 8 to 9, 2019 (weather permitting). The call sign used will be DP0GVN/p. 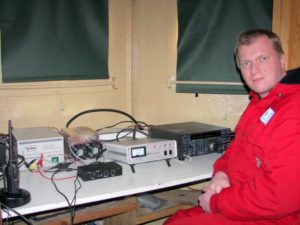 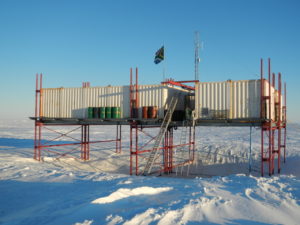 In December 2009, the German Station “Neumayer II” (WAP DEU-02) has been handed over to South Africa. SANAP (South Africa National Antarctic Program) did continue to use this facility as a replacement for the old South African “E-Base” (WAP ZAF-01). “E-Base” is short for “Emergency Base” and it is used as a logistical facility in order to support supply operations to SANAE IV Base (WAP ZAF-Ø3) in Antarctic summer. In 2009, a team of 16 people arrived onboard SA AGULHAS in order to take down Neumayer II and install the new E-Base right on top of it above the snow. The remains of Neumayer II Base, large hollow metal tubes which once hosted living shelters and laboratories, are buried under thick ice.

Today, just the garage is used as a storage facility by SANAP.

As far as we know, the only HAM radio activity from this remote Antarctic site, was done by Lars Lehnert DL1LLL who did operate as ZS7/DL1LLL on last 26 Oct. 2012 so, this new operation by Matthias DH5CW & Felix DL5XL  (that will sign DPØGVN/P) will be a great opportunity for the Antarctic Chasers … stay tuned and do not miss the chance!
TNX DL5XL (DP1POL) and DH5CW (DPØGVN)