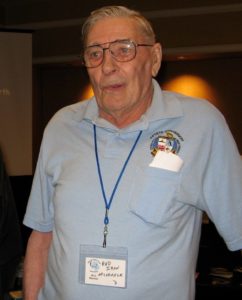 oming across a social network, I found an interesting page, set by someone set foot in Antarctica and left a tangible sign of what they did!
Here below is a piece of the a long and distinct period of history with a particular feature or characteristic; WAP have to be grateful to Mr. Patrick McCormick a veteran who spent a period of his youth in Antarctica and we are so happy to relive such great memories!

Patrick (pic aside) wrote: I wintered at McMurdo in 1956 and had a hand in building the “Our Lady of the Snows” Chapel. The following is an excerpt from my memoir describing its origin. The attached photo was taken in late December 1956. “There was one building that wasn’t exactly in the original plan.
The Chaplain, LT Father John Condit, universally known as Father John was a free spirited and very persuasive soul began to accumulate and stockpile “scrap” building material at end of the street near the base of Observation Hill. It was only a matter of time until he began recruiting, practically under threat of court martial, “volunteers” on their off time to put this “scrap” together to form a small Quonset Hut. Work began in mid February with some work, much to the chagrin of Mr. Canham, done on Navy time, but it was well into winter before completion. We had no plans, but with “Seabee Ingenuity” and “Can Do” spirit it turned into a chapel complete with altar, confessional, storage closet, steeple and belfry. After the port tanker ships had reached their winter berths, 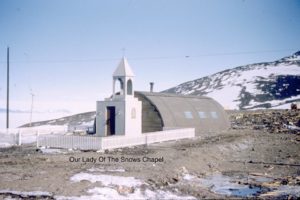 a bell from one of them somehow made its way up the hill to its place in the belfry. On May 6,1956, the Chapel was consecrated to Our Lady of the Snows and the bell consecrated to Saint Dismas, the good thief.”

This is a genuine story and today, after more than 60 years, it revive here as a great example for everyone, certainly a source of pride made relive!

Well at this point,  it takes me a bit of emotion and I just close the story with the comment came from Patrick:  – I am more than happy to share those memories with anyone who will listen to an old man ramble-