Russian Robinson Club will celebrate the 200 years of Discovery of Antarctica. Starting Jan. 1st through March 31st the most important Russian Club (RRC) will be on air using a special callsign R2ØØANT (WAP-3Ø4) – QSL via RZ3EC.

Special RRC Award and special Plaque  (see pics  below) will be issued for this event; rules will come later

History: The military sloops “Vostok” and “Mirny” set off for the first Antarctic expedition from Kronstadt in 1819. The main task of the campaign was to prove the existence of the sixth continent. The 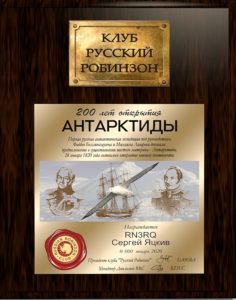 captain of “Vostok” Faddey Bellingshausen led the expedition. “Mirny” was commanded by Mikhail Lazarev. On January 27, 1820 ships crossed the Antarctic Circle. During the sailing, “Vostok” and “Mirny” circled around the entire Antarctic continent, discovered and marked on the map many new islands and lands, and collected a unique ethnographic collection.

A special WAP reference WAP-3Ø4 has just been issued to R2ØØANT which operation falls into the WAP  Antarctic Activity Week (http://www.waponline.it/antarctic-activity-week/aaw-2020/) 10-17 Febr. 2020. A great opportunity for the Antarctic chasers to celebrate the 2ØØ anniversary  of discovery Antarctica together with the brothers of Russian Robinson Club and log something new !