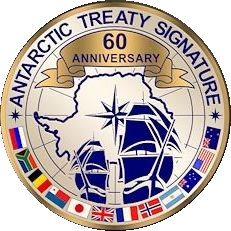 Antarctic Treaty entered into force on June 23rd, 1961, covering demilitarization of the Antarctic region, its use for exclusively peaceful purposes and transformation into a zone free of nuclear weapons.

In honour of the 60th anniversary of the event, from October 1st to December 31st, 2021 Russian Robinson Club together with SRR, Hamlog and other interested organizations plans to conduct a special activity usingh 12 different callsigns, by the number of countries that originally signed the Antarctic Treaty. Read more at : https://www.qrz.com/lookup/r60ant
R6ØANT is WAP-324

Russian Robinson Club together with SRR and HAMLOG.Online will issue a special award and plaque. More details at:   https://hamlog.online//club/rrc/209
See also  http://www.waponline.it/6oats-anniversary/6oats-awards/