WAP ECU-Ø2 is a new reference, just issued to this Antarctic Refuge. 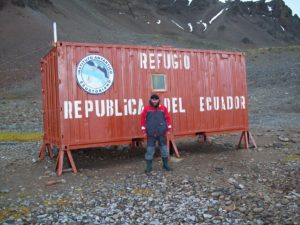 Republica del Ecuador it’s an Antarctic Refuge located at Hennequin Point, 62°07’16” South,  58°23’42” West inside the Admiralty Bay on King George Island (or 25 de Mayo Island). It was installed by the first Antarctic expedition of Ecuador and inaugurated on January 13, 1988 with the assistance of delegations from Germany, Argentina, Brazil, Chile, United States, Poland, Russia and Uruguay, which have Bases, scientific stations and shelters in the island. Its first occupants were Ecuadorian scientists who performed hydrographic and geological works. Republica del Ecuador Refuge consists of a six-meter container that has basic medical supplies, non-perishable food and two bunk beds with a capacity for four people. It is for researchers and tourists who want to rest or study the area.

Mehdi F5PFP together with ON7ZM (see 2 pics aside), made a short 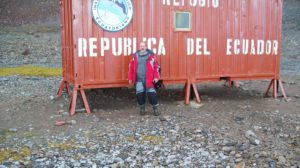 stop on Republica del Ecuador Refuge on Febr.22, 2009 just before landing on Macchu Pichu Base (WAP PER-Ø1).

He was active from there as HC/FT5YJ (see pics attached)  and logged 5 QSOs with South America (LU3XPM, CX8OX, LU8XW, PY2BQA, CE8RPA), even if nobody claimed the card …!  Mehdi wrote:-we discovered an high QRM level coming from the generator that provided S7 to S9 of QRN on 20mts. We spent most of the time trying to resolve that problem but … nothing! So, Republica del Ecuador was on air even if it was a very brief!-

Ecuadorian Navy provide regular maintenance: Ecuadorian mission did repair the Refuge on February 9, 2006 working 37 days, and also from December 16, 2013 through  January 18, 2014, Officials of the 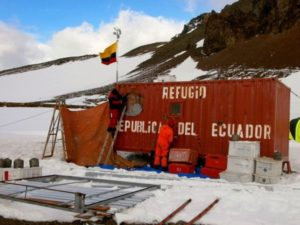 INOCAR (Oceanographic Institute of the Navy), performed the integral maintenance of the Refuge including graffiti, repair of walls, ceiling and floor.(pic on the right)

It was a brief operation due to a problem with the generator –says Mehdi–  I also remember  the refuge is not well situated to anchor  with a sailing boat due to an inappropriate depth of the sea floor , so we stayed just  maybe an hour then we moved to Machu Picchu a neighboring place of Admiralty Bay – King George Island-.