The oceanographic research vessel  R/V Hespérides  of the Spanish Navy,  is sailing to the frozen Continent to participate in the XXXII 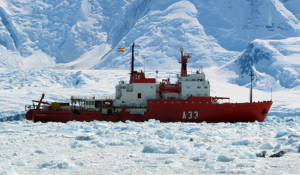 Spanish Antarctic Campaign. About two hundred scientists and technicians will be in charge of the research projects, which will be carried out in the transits of the ship which will serve as a platform for carrying out 24 research projects. The deglaciation of the Antarctic, the activity of submarine volcanoes and the impact of parasites and contaminants on the penguin’s immune system, are some of the most outstanding projects in the XXXII Spanish Antarctic Campaign.
One of the interesting things of this Antarctic campaign,  is that R/V Hespérides hoists in its forward mast, the commemorative emblem of the V Centenary of the first round the world made by Fernando de Magallanes and Juan Sebastián de Elcano. The frigate’s captain José Emilio Regodón, commander of the ship, explained that during the voyage they will stop at the ports of Montevideo (Uruguay) and Ushuaia (Argentina) to later go to the South Shetland Islands to support the Antarctic Spanish Bses down there.