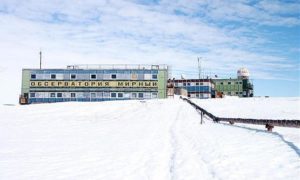 Alexander Solodov, RX3ABI  arrived at Mirny Base (WAP RUS-Ø7) on last mid March and has just started to be on air signing RI1ANM.

He is wintering at the station till the beginning of 2021. Alex is actually working on his antenna and is active from time to time …. sure we can contact him in the near future !

Keep an eye to the Packet Cluster…
TNX François, F8DVD

The first overwintering party had 92 members, and the station included a pigsty that supplied fresh pork. Now it houses up to 50.