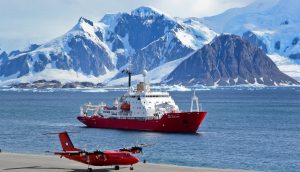 This is the second time that a UK research asset has transferred to Ukrainian research colleagues. The first being the transfer in 1996 of the former Faraday Station  (WAP GBR-Ø6)  that is now known as Vernadsky Base  (WAP UKR-Ø1).

For the past three decades the JCR has fulfilled her role as a world-leading research platform for biological, oceanographic and geophysical research. She contains some of Britain’s most advanced facilities for oceanographic research in both Antarctica and the Arctic.

The ice-capable ship is a new asset for Ukraine and opens up new research opportunities for its National Antarctic Scientific Centre, in particular research into oceans and climate change in the polar regions.

The purchase of the ship comes ahead of the COP26 Conference in November, where representatives from every signatory party for the United Nations Framework Convention on Climate Change (UNFCCC) come together to discuss climate change action.